Delimitation of the World Heritage Site

The core area recognized by UNESCO

The monumental complex belongs to the so-called core area, the area of greatest relevance of recognition by UNESCO, framed within the urban perimeter, extended for 8.87 hectares, and including the Square and its buildings. The current configuration of the core area dates back to 2007 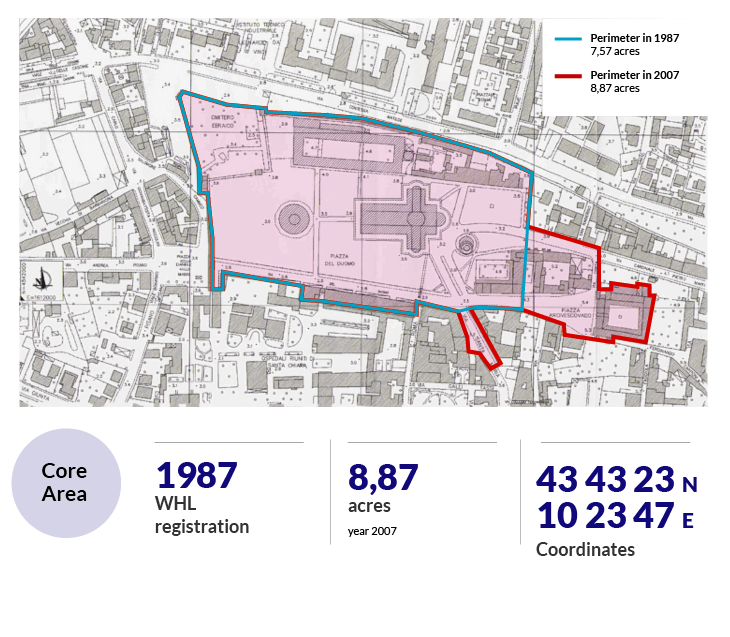 Within the core area there is a heterogeneity of architectures that contribute to making this part of the City unique in its kind. The Square is distinguished, in fact, for the combination of classical, early Christian, Lombard and oriental characteristics. It is the buildings themselves that modulate and generate the space of the core area. They constitute a unicum of their kind and, therefore, are highly sensitive to the need for an adequate binding regime. The management of these assets guarantees a good state of conservation of the artifacts, which must also be made constantly accessible to the huge tourist flow that characterizes the Square.

In the core area of ​​the Site there are nineteen properties subject to direct protection, including the same area of ​​the Piazza: the Cathedral of Santa Maria Assunta, within which there is the Chapel of San Ranieri; the Bell Tower of the Cathedral; the Baptistery of San Giovanni, inside which there is the Pulpit by Nicola Pisano; the excerpt of walls, part of the ancient medieval fortification system still clearly recognizable in the historic fabric; the Camposanto Monumentale, a Cemetery that delimits the north side of Piazza del Duomo; the Palazzo dell’Opera della Primaziale Pisana; the Opera Museum of the Cathedral of Pisa; the Jewish Cemetery; the Archbishopric; and some properties located near Via Cardinal Pietro Maffi.

The buffer zone and its role in the care for, and protection of, the Site

Within the Operational Guidelines for the application of the World Heritage Convention, the concept of buffer zone is defined, in Italian "zona tampone" or "cuscinetto", as an "area to guarantee an additional level of protection to assets recognized as World Heritage".

In 2007 Italy proposed that the buffer zone of the Piazza del Duomo Site in Pisa should coincide with the historic center of the City. This proposal was subsequently approved. In this prestigious context, Piazza del Duomo, with its innumerable peculiarities, is located near the upper edge of the walls and, therefore, decentralized with respect to the historical fabric, which is it is in the north-west border of the buffer zone. In fact, it is divided on one side, mainly along the north-south axis, and on the other perpendicular to it, following the natural development of the Arno river. The Site's buffer zone covers approximately 254 hectares, mainly south and east of the core area. To the north, the area extends just beyond Piazza del Duomo, up to Via Contessa Matilde; to the south, up to Viale Francesco Bonaini – near the Central Station; east to Via Bonanno Pisano, and west to Via Vittorio Veneto. It includes secular and ecclesiastical buildings of historical-artistic importance, entrusted to entities of different nature.

The buffer zone is crossed by the Arno river, which inevitably defines one of the main features of the context in question. Along the banks of the river there are numerous palaces and stately homes, built starting from the sixteenth century. Inside the urban nucleus of Pisa there are historical artifacts linked to particular infrastructures and services: from the remains of an ancient thermal complex known as the "Bagni di Nerone", the terminal section of the Medici aqueduct, the supporting structure – di Porta a Mare – to the ancient navigable canal of the Navicelli, the last part of which lapped the City walls near the Stampace bastion.

Some of the historical and cultural values ​​of the City are represented by the system of museums, by the monumental excellences, by the “places of knowledge”, by the historical heritage of medieval origin (Lungarni, Via Santa Maria area). The monumental complex of Piazza del Duomo and the medieval walls of Pisa represent the visual references par excellence, visible from a distance from numerous panoramic points. The presence of an urban green system, consisting of parks and public and private areas and other connection systems (marginal agricultural areas, urban areas of fluvial relevance also equipped with paths), ensures continuity between the anthropized space and the surrounding naturalistic order, taking the form of a landscape nature.

The character of the historic center derives from the multiple transformations that have taken place over the centuries within the City, which, as the first among the Tuscan ones, has seen unprecedented political and cultural development. The culture and art of Pisa and, in particular, its architecture, characterized by Pisan Romanesque and influenced by the Arab world, spread throughout Tuscany over time. During the Early Middle Ages, the geomorphological structure of the historic center of Pisa was born, which can still be appreciated today. The forma urbis, therefore, arises from the merger of the three nuclei gathered in the walls of 1155. The medieval fabric is still recognizable today, in particular in the urban layout and in the recurrence of the building typology of the "casatorre"; moreover, the presence of monumental elements such as the City walls, the numerous Romanesque Churches and the fortified structures of the ramparts and arsenals, determines its Outstanding Universal Value.

If, therefore, to the south and east the core area is protected by the buffer zone constituted by the historic center of the City, with the characteristics already mentioned, on the other hand, to the north and west the absence of an essential buffer zone is evident for the adequate protection of such an important historical and cultural heritage.

The type of urban fabric found on the north-west border with Piazza del Duomo, which does not currently fall within the buffer zone perimeter, stands out because it belongs to the recent expansion of the City, which took place in modern times, and which does not follow the logic of housing types and the morphology of the historic City..